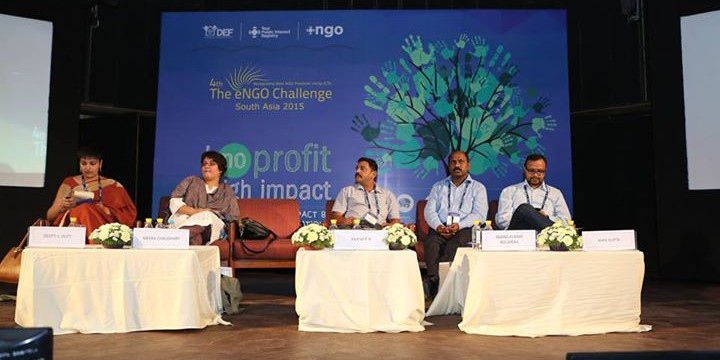 One of the sessions of the 4th eNGO Challenge South Asia Conclave & Awards Gala organised by eNGO, Digital Empowerment Foundation and Public Interest Registry at Stein Auditorium of India Habitat Centre on 9th October, 2015, was on Social Media and Social Commerce.

With 20 finalists in this category,the agenda of the conference was ‘How is social media used to achieve objectives’. The session started with representations of various NGOs presenting their work.

Breakthrough: The organisationfocused on women empowerment through social media. The presentations talked about three types of violence against women: domestic violence, early marriageand sexual harassment at public places. Breakthrough combats these issues by creating powerful content, for instance, sexual harassment is a heinous crime, and they created posters explaining the laws against sexual harassment. These were then disseminated through social media, which is used by them for unifying communities, mobilising opinions and amplifing ground level work.

PraveenlataSansthan: The mission of the Sansthanis holistic development of underprivileged children, education, empowerment of women and rural development. The organisationgrew and got recognition through social media after they used Facebook as the first mode of dissemination of information.

Society from Development Activities Project KHEL: Project KHEL uses play and interactive methods to transform adolescents into positive agents of change within their communities. Social media is the main communication channel. They strategise their posts and also decide about the number of the posts to be posted in a day. They share articles on Facebook regarding the same. Their Facebook page is liked by around 36,000 people.

Chhanv Foundation: Chhanv is a support centre for acid attack fighters. Its mission is to reach out to all the acid attack survivors across India and create a sustainable life for them. Chhanvuses social media for awareness, to reach out to acid attack survivors and for their empowerment. The vision of the organisationis to free India from this crime, which reflects the flaws of our patriarchal society and abusive attitudes. Chhanv also aims for survivors to have access to fast justice and fight back the irreparable impact of this crime. Facebook is the main source of funding for this project, and the organisation has around seven lakh followers on Facebook.

Wildlife S.O.S: The focus of Wildlife SOS is to rescue and rehabilitate wildlife in distress in both urban and rural environments. Wildlife SOS rescues a number of orphaned, injured, and displaced wildlife found in cities and other locations. Wildlife SOS is mainly known for the work of rescuing and rehabilitating ‘performing bears’ or sloth sears. They use social media to get volunteers; to spreadawareness; and to engage peoplewho could report cruelty.

Read India: The mission of this organisationis to empower farmers by making them aware of their rights and farming techniques. Read India runs helpline numbers in Rajasthan and Uttar Pradesh to address farmers’ queries on fields. They have adopted the IBRS method to reach to the farmers in order to resolve their issues. READ India brings together education, enterprise and community development to create lasting social change in rural village through the use of Vani mobile to reach the rural people.

Turnstone Global: The main areas of activities of Turnstone Global are education, health, rehabilitation, services for disabled, sanitation, school, hostel and community hospital, among others. The vision is to make a world free of poverty and injustice, where every human being — irrespective of his/her age, sex, cast, creed, religion, birth place or disability — enjoys the right to life with dignity. The organisation also aims to empower the marginalised sections of the society by enhancing their knowledge, skills, capacities, access to opportunities, services and their participation in life’s decision. The mission is to facilitate the holistic empowerment and development of the disadvantaged sections of our society and help them achieve their highest potential and prepare them to face life challenges with high confidence. Turnstone Global earned popularity through Facebook where they use a participatory approach to achieve their goals.

Nidan: The mission of Nidanis to initiate, establish and consolidate people’s institutions, processes andprogrammes aimed for socio-economic development of poor. They organisation uses social media to reach out to and capture and connect to the target audience. Nidan also uses social media as a platform to raise funds.

IndiaSpend: IndiaSpendutilises open data to analyse a range of issues with the broader objective of fostering better governance, transparency and accountability in the Indian government. IndiaSpend is rapidly growing to become an ‘agency of record’ when it comes to data and facts on the Indian economy, particularly in areas like education and healthcare as well as data on the states of India. Social media gives them visibility and a platform to share and disseminate their content.

Teach for India: Teach for India works towards bringing education equity. It is a nationwide movement that aims to bridge the educational gap in India by placing the country’s most promising college graduates and young professionals, from all academic majors and careers, in low-income schools to teach full-time for two years.Social media is a catalyst to their motive of reaching out to the people. They post information on social media about fellowship programmes, recruitment campaigns, stories about donors and more, besides creating awareness regarding their campaigns.

Computer Association of Nepal: The organisation is working to help Nepal earthquake victims online by coordinating with people outside the danger zone, the missing ones and the rescue team. They use social media to rescue the victims of April 2015earthquake in Nepal.

My Choice Foundation: My Choice is about giving women and girls choices to live a life free from abuse. My Choices works with the root cause of violence against women by targeting its most invisible domain –home. PeaceMakers, true to their name, seek to strengthen healthy family structures through offering counseling to families, and where needed/wanted will help victim seek legal action. Rather than returning a slap, PeaceMakers use education to deter violence and give women and girls a voice in their homes. Of the women that have received counseling, 74 per cent had never sought any kind of help prior to meeting a PeaceMaker and 43 per cent of these women now believe their only recourse was/is through a PeaceMaker. My Choices has taken its PeaceMakerprogramme to schoolgirls as well. Additionally, by making use of a social media platform called Mxit, My Choices is able to bring 100 per cent free and private counseling to any Internet-enabled mobile.

Jharkhand State Livelihood Promotion Society (JSLPS): The vision of JSLPS is tocreate a socio-economically developed Jharkhand through inclusive growth strategies for empowering the underprivileged members of vulnerable communities or groups, resulting in them leading a dignified life. The mission is to remove poverty from Jharkhand. For this purpose, the society believes that SHGs is a tried and tested model and a successful approach to fight against poverty. Their project SULEKHA is about transforming the rural women into Tablet Didi. So far, they have provided Tablets to more than 25,000 women and trained them.

The session concluded withthe panelists expressing their views on the use of social media. Praveen Aggarwal talked about the various ways of getting connected on social media: direct action and data collection could be one of the objectives of getting on social media and monitoring of the impact.

According to Anand Kumar Bolimera, three key-points must be kept in mindwhile using the social media in dealing with gender issues: identify victims to empower; approach the other side of the fence, that is, find out ways to sensitise men to end violence against women; focus on human rights collective attempts should be made to impactpublic opinions.

Kapil Gupta talked about the mushrooming influence of social media. “Three years ago, people used to talk about setting up a Facebook account. Last year, people were talking about leveraging Facebook and Twitter. And now in 2015, people are talking how social media is impacting the masses,” he said and suggested that organisations should focus on reaching out to different opinions and campaigns instead of increasing their size on social media.

MeeraChaudhary seconded his opinion an added that there is a need for profound research before using social media with pointed focus on the issue and analyses of the people who like your page.

On this note, Deepti V Dutt concluded the session by reminding that amid negative news around several NGOs, these non-profits are the only groups that talk about solutions and positivity.