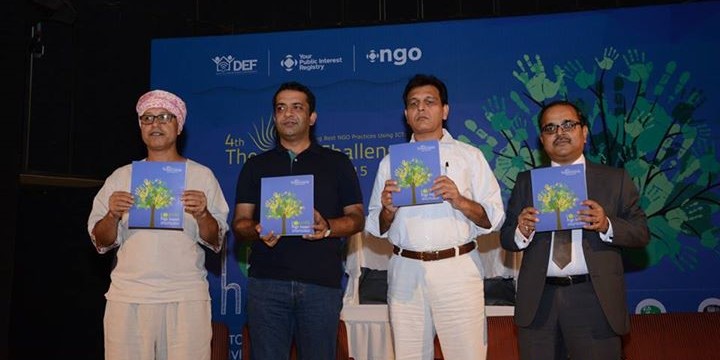 NGOs have to fill the gaps with digital tools

Every year, the eNGO Challenge Awards recognise and accolade best practices in ICT by NGOs. This year’s theme for the day-long event, which included interactive session, was ‘No Profit, High Impact’, and Digital Empowerment Foundation (DEF) received a total of 225nominations, out of which 67 were shortlisted and 15 were declared winners across five categories.

Mr. Manzar invited Mr. Singhal to introduce the audience to the eNGO Programme and the .NGO domain, which were recently launched by the Public Interest Registry (PIR) in collaboration with DEF in India.

He stated that PIR’s focus is India, which has a large sector of Civil Society with 3.1 million NGOs, is to move towards digital literacy and create digital footprints. The government is also playing an important role in the area of digital inclusion for rural development.

The civil society has played an important role in de-centralisation of Panchayati Raj, which makes local governance better. The success of grassroots organisation lies in “partnerships with other organisations and government organisations which have common objectives and goals, organising capacity building programmes and the objective of holding the system accountable, whenever necessary”, emphasised Mr. Sinha.

ASHA workers have developed a customised query-based system which spreads awareness on women and children health issues. There have been digital interventions in the e-Governance of NREGA as well. The listings of jobs, workers, their daily wages have all been made available online. These little digital footprints have empowered women, brought along a behavioural change and improved interpersonal communication skills at the grassroots level. And there are many more steps, besides NREGA, that have been taken towards the era that has just picked pace.

Adding to the thought, Mr. Manzar remembered an incident when hundreds of women queued up at Ratnauli to get their “incorrect” data and statistics corrected on the NREGA website — “this is an intangible impact of digital inclusion”.

“It is not the economic constraint that stops expansion from happening; it is a trained human resource,” said Mr. Anurag, adding that information technology has the power to create employment, fuel development and generate wealth. Thus, Capgemini’s focus in CSR has been on education, employability and environment.

Coming together for NGOsis very important“for networking, to scaleup great ideas and to create the most impact”, he said and, once again, emphasised on accountability and transparency.

“What NGOs are lacking is respect. The fraternity has been unsuccessful at being transparent. The problem lies within the organisation,”said Mr. Gupta. At the same time, he said, it is very important to compliment and support the role of the government in the development of the nation. The role of the NGOs “is to fill the gap”.

To fill this gap, digital media and solid content are the key tools. ‘Stories of Change’, created by Goonj, is an example of digital content through which the last-mile stories are easily accessible.

This brought the audience and the panelists to the question-and-answer round, which was moderated by Mr. Manzar.

Following an interesting and interactive Q&A round, the 4th eNGO Challenge South Asia 2015 Awards book titled ‘No Profit, High Impact’ was released by the panel, followed by the unveiling of the .NGO domain which was launched worldwide early this year.