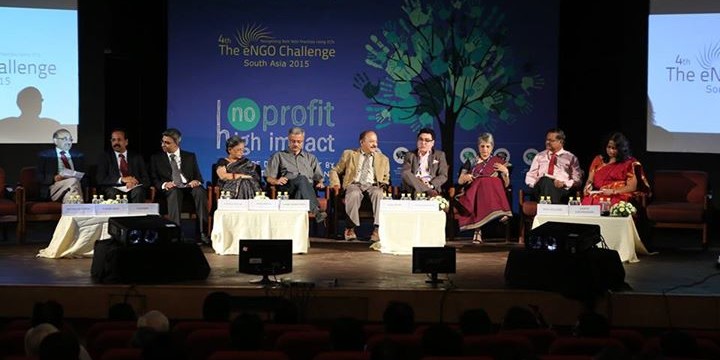 With the passage of the Companies Act 2013, the mandate for Corporate Social Responsibility (CSR) was formally introduced to the dashboard of the boards of Indian Companies. The Companies Act2013 contains 470 sections. However, the most important and talked of section is Section 135. Section 135 brings out the key concept of CSR.

To focus on the ‘why’, ‘how’ and ‘what’ of strategising, planning, executing and monitoring the CSR activities of companies, Digital Empowerment Foundation hosted a panel discussion at eNGO Challenge South Asia Awards. The awardswere held at Stein Auditorium of IndiaHabitat Centreon October 9, 2015.

Ms. Subramaniam initiated the panel discussion by elaborating on the concept of CSR. “India’s development sector, like never before, has ample opportunities to receive funds from corporates. A minimum of 6,000 Indian companies will be required to undertake CSR projects in order to comply with the provisions of the Companies Act2013 with many companies undertaking these initiatives for the first time. Further, some estimates indicate that CSR commitments from companies can amount to as much as Rs. 20,000 crore,” she said.

To address the question of credibility and how corporates would choose NGOs to partner with, Mr. Williams said that, sometimes, small organisations have big work and big organisations have small work. “Organisations have got grade‘A’ by Credibility Alliance but zero mark on the ground. Companies may not go by that. Ground work is necessary,” said Williams. “Real-time reference and experience is required while choosing the right NGO partner,” added Ms. JyotsnaBhatnagar.

Jindal Stainless partners with NGOs around manufacturing companies. Manufacturing companies require license to operate. “Win hearts and minds of the locals. Talk the language of the heart,” added Williams. Besides building capacities, empowering women is a big challenge as well. Jindal Stainless is mobilising women to engage them in steel and iron industry. Women would work shoulder to shoulder with their male counterparts in stainless steel fabrication. “Opportunities are humongous. Every partner is equally important and capable,” added Williams.

Agreeing to that thought, Mr. Sahijwanistated that companies want to invest in CSR where they can expand.“Money should be properly utilised, and it should generate employment, sales and ensure return. Right people and right money for the right cause!”added Sahijwani.

If a corporate is investing in a cause, it wants some results as well. Before inesting, a corporateusually asks, “WIFM- What’s in for me?” said Gayatri. And this “return” may not necessarily be terms of cash but could be in the form of even success stories.

National Voluntary Guidelines (NVGs) are basic principles for how to do business. Business should be ethical, accountable, environment friendly and employee well-being should be maintained, the products should have a safe and sustainable lifecycle. “It isn’t just a guidebook but now corporates are answerable, thus they have to maintain standards,” answered JyotsnaBhatnagar, when Gayatriasked her to throw some light on NVGs.

On behalf of the government, Mr. Verma was present onthe panel. It cannot be denied that the government plays a key-role in development and sustainability, and CSR or NGOs can never match the widespread issue of education and health like government initiatives can.

“A bottom-up approach is important for development. We need to empower the panchayats, urban local bodies and citizens through a system of gram sabhas. Instead of roping in the dark, CSRs can know where the money can go.And governments can help you identify where the CSR can invest,” said Verma.

Mr. Chakravortybelieves said it is important to understand a company’s needs on the field.“Now companies have to showcase their CSR work on their website,” he said.This can help NGOs find the right focus and geography for the company’s works. Corporate wants to get a certain job done at a certain place, what kind of NGOs fit in.

The important is what makes one particular NGO “important” when there are “so many different NGOs”. NGOs need to answer this question. Once that question is answered, a corporate can get involved through three phases — before the CSR work begins on ground (includes baseline survey and assessment), implementation of project and post-CSR work.

Mr. Aggarwal is a person who has in-depth knowledge in both the fields of CSR and NGO as he himself has made that transition, and quite smoothly. He joined Swades Foundation three years ago to fulfill the aim of the organisation of corporatising the civil society. Swades Foundation works for scaling up a development model, which involves a 360 degree holistic development. The organisation believes in eradication of poverty — mental or economic.

“If a project timeline is set, deliverables have to be met.No excuses can be accepted,” says Aggarwal. “Companies are eager to find right and credible partners. And the driving focus should be scaling up, innovation and transparency.”

Swades Foundation works in 2000 villages, touching 5,00,000 lives. He believes that mental poverty is a far greater issue than economic poverty. “I do not support need assessment. Need is for sanitation, health, shelter and food.But where is hope and aspiration? Hope for not a frugal toilet but a quality toilet?” he asked, adding that the relationship between NGOs and corporates should be like that in a marriage.

“Partnerships should be long term as well. Organisations need to communicate with the corporates and set a common goal so that no partnership can fail,” said Aggarwal.

Adding to this thought, MrMishra said that NGOs need to do a due diligence and a self SWOT analysis. “NGOs need to research a lot. The vision and mission should be unique and out of the box,” said Mishra.

This uniqueness can help bridge the digital divide between the urban and rural India. To bridge this gap, Samsung’s Corporate Citizenship runs smart schools and skill development programmes. These programmes eventually lead to employment, rise in incomes and,thus, improved livelihood.

Making initiatives like this is also Tech Mahindra. “Tech Mahindra has been involved in CSR since 2007,much before it was made mandatory by the government,” said GauravNayyar. One of the key philanthropic programmes of Tech Mahindra is its Nanhi Kali Programme. Tech Mahindra has always tried to go beyond the identified sectors such as health and education.

The diversity in development is crucial in a country like India where there are numerous problems. Mr. Joseph said that, thus, NGOs have a very important role to play. “NGOs can understand communities and have unique skill sets. Today, corporates discuss CSR in their boardrooms,” he said.

This is the reason that, alike almost every other corporate organisation, DLF Foundation is also aiming for government, private and NGO partnerships in addressing pertinent issues. DLF has an integrated nurturing talent and intervention programme in government schools, wherein a complete, holistic assessment is done.

On behalf of the NGOs, Ms. Amita Joseph was present on the panel. “Why only due diligence of NGOs and not ofcorporates?” she asked. “If corporates have the funds, NGOs have skills. And they two need to “meet at an equal level” and look for integrity at both sides.Both should be equal at the negotiable table, Joseph said. She also said that NGOs should ask themselves why they are here?“We are here to help the needful by using very frugal resources. NGOs are here because the government is not able to do its work,” she said, and questioned why only three programmes —Clean Ganga Campaign, PM Relief Fund, SwachhBharat — have 100 % tax exemption.

On this note, she repeated one of Gandhi’s quotes: “Cooperate when you can, resist when you must.”

“With mistakes, learnings are also there. Trust NGOs and move forward,” reminded Mr. Williams even as Ms. Bhatnagar noted, “It is important to be transparent and to understand each other.”

Agreeing to this thought, Mr. Sahijwani added, “You prosper, I prosper. Let’s work together to serve the society.”